Kim has a new book out! Woo hoo! I see now that I didn’t blog the first in the series, Magnetism, which was simply wrong of me. So I’ll attached cover and blurb for it, too. And I’ll also add Kim has a new release coming from Carina Press, Synthetic Dreams, which is on par with my love for Gambit and Emergence. I’ll blog that once it’s available for purchase, but it’s such a nifty story. Can’t wait to see what the cover looks like for that one. 🙂

Book one in the Planetary Bodies series.

Orlena Sol is not meant to be in her room, naked…with her superior officer.

The crew of the CMC Theseus doesn’t have sex. At least not with each other. But there’s a new hunger in Dareh Andersen and he’s looking at Orlena as if she’s all too edible. He’s ready to fulfill her fantasies, which makes no sense. He’s always wanted anyone but her.

Orlena is convinced there’s more to his sudden interest. She fears his desire is simply a dream, a lie. Something other, something outside and beyond them is at work…but it’s a force she doesn’t want to fight.

END_OF_DOCUMENT_TOKEN_TO_BE_REPLACED 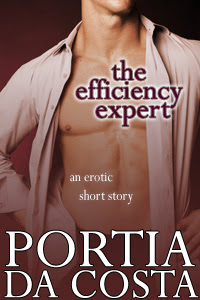 Still stinging from a stringent management review at her workplace, office girl Susie encounters the very last man she wants to meet when she hits her favorite bar to relax and unwind. Gorgeous Noah Stevens is the ruthless company troubleshooter who’s been making her life hell for the past three weeks, but after hours, he soon proves that his dedication to “efficiency” can work wonders in the bedroom.

This week on PNRomantics, I’m blogging about trying something new.

My usual reads, and comfort reads, are fantasy or paranormal. So there’s a whole lot of unexplored territory out there for me. Sasha Devlin’s debut novella, In the Light of Day, comes out first thing in the morning, and I’m going to give it a try. It’s m/m, which I’ve read, contemporary, which I’ve read, and it’s also romantic suspense, which I haven’t read except in almost classical examples.

I’m interested to see how Ms. Sasha blends the three together. Who knows? She might make a rom sus believer out of me. 😉 END_OF_DOCUMENT_TOKEN_TO_BE_REPLACED

I’ve been catching snippets of this novella for the past couple of months through Six Sunday. Now that it’s released, I had to pick up a copy. I’m hoping I can read it over the weekend. 🙂

As a girl, Emma Whiteside asked Adam Caldwell, Viscount Riverton, to wait for her to be of marriageable age. Now, twelve years later, Emma hates Adam as much as she once loved him, holding the former army major responsible for the death of her brother on the battlefield.

Adam already blames himself for the loss of the men under his command. But the fiery young woman Emma’s become sparks his arousal, as well as emotions Adam thought long dead. The passion between them makes him want to reclaim the man he was before the war.

Though she tries to hold on to her hatred, Emma’s longing for Adam is undeniable, especially after the two share a smoldering kiss. Still, Adam is certain no woman would want a man so damaged. Can Emma prove him wrong?

For more information on Taryn, you can visit her website here.

I finished reading Poison Kissed a few days ago. I’ve kind of sat on blogging about it, because I was already suffering withdrawal symptoms before I turned the last page. Shadowfae hooked me. Shadowglass, I really enjoyed. But Poison Kissed is my hands down favorite.