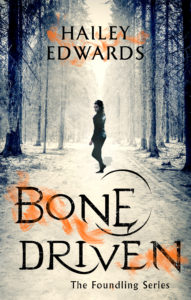 Luce Boudreau returns in another powerfully addictive installment of the USA Today bestselling The Foundling series.

The bayou is burning, the battle is just beginning – and Luce Boudreau is smack in the middle of no-man’s land . . .

Life as a cop in Canton Town, Mississippi, is never dull – particularly when hiding deep within you is a demon bent on the apocalypse. Luce is doing her best to pretend her two worlds aren’t crashing into each other, but what should be a routine arson investigation takes a shocking turn when Luce discovers a link between the suspects and her own dark secrets. There’s no turning back, even though her search for the truth threatens to burn her old life down around her.

Lines are being drawn in a war Luce barely understands, and she just might be on the wrong side of them. Now she must embrace her powerful destiny, or the ones she loves most will pay the ultimate price.

What readers are saying about Hailey Edwards:

‘A fantasy of a five-star read!’ Amazon reviewer

‘This is a well written and entertaining story, full of humour and suspense, that I found to be a terrific read.’

‘A fast-moving journey filled with the unexpected.’ (RT Book Reviews)

‘Edwards has this way of writing that makes you feel like the narrator is talking to you and that you’re old friends.’ (Goodreads)

‘The world building is fresh . . . The characters are well-drawn and easy to root for. And the romance really hits the spot. ‘(Red Hot Books)

‘One of the most interesting books i have read in a long time, it starts off pretty normal but when the shocks start coming they don’t stop and Luce ends up feeling from one revelation after another.’ Amazon reviewer

‘One aspect of her writing I enjoy is her ability to take the mundane and with a few changes, turn it into something unique and unexpected. She builds dynamic character bases, using common mythology but takes it one step further using previously unseen species or imbibing currently known species with skills and know how that offers readers something new in the paranormal world.’ (Smexybooks.com)

Some readers have been notified their pre-order for Bone Driven was canceled. A glitch on Amazon (US) is to blame for creating two listings with separate ASINs. The release date–May 31st–stands. It will publish on time.

We’re not sure if the lost pre-orders can be recovered. If you received an email from Amazon, I would suggest reordering the book to make sure it hits your Kindle on release day. The verified link is here: https://www.amazon.com/Bone-Driven-Hailey-Edwards-ebook/dp/B0796RRCZ7 …