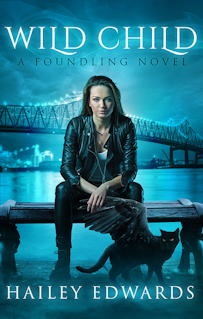 Luce Boudreau is following in her adopted father’s footsteps, and the whole town is watching her every move. Life as a minor celebrity, dubbed Wild Child Boudreau by the local papers, ain’t all it’s cracked up to be. She’s used to the curious stares, the pointed whispers, and the way people frame her in their selfies as she writes them speeding tickets. Notoriety comes with the territory for Luce, a foundling who was captured running buck naked through the swamp as a girl. The alien markings on her skin only add to her feral mystique. Despite all of that, Luce considers herself normal. Human.

At least until a high profile kidnapping brings Cole Heaton to Canton, Mississippi. The guy is basically a mountain that sprouted legs, and he’s done nothing but step on her toes since his arrival. Convinced he knows more than he’s sharing—about the case and her—Luce decides to play nice. For now.

Just as their partnership heats up, a vicious attack forces Cole to expose his darkest secrets to save Luce. Turns out Cole isn’t quite human, and neither is she. And they aren’t the only non-humans out there. Luce has siblings, actual blood relatives. Too bad their idea of bonding is toasting marshmallows while the world burns.

Warning: This book contains one heroine with no clue who she is or where she came from and one hero with a taste for amnesiac heroines. There’s also a magic phone, a winged cat, a winged dragon, and a bonus winged dude in the epilogue. Wings are a theme. So are cats. Expect purring.