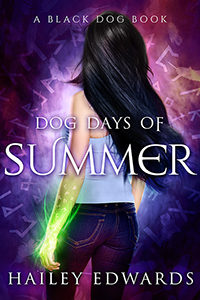 When a fae boy goes missing, all evidence points to a warg being responsible for the crime. Thierry is called to lead the hunt for the rogue, but the closer she gets to locating the boy, the further she gets from the truth.

Titles available in this series include:

The sun beat down on my head and bare shoulders. I smelled coconut and my skin burning. June was brutal in Texas, and my sunscreen had sweated off hours ago. Thank God. My skin would regenerate on its own, but tell that to Mom and her spray bottle of SPF 100. After this I would need a miniature shovel to unclog my pores. Not to mention a gallon jug or three of ice water to stave off dehydration.

Heat radiated off the sizzling asphalt while I trudged onward down the low shoulder of the road. A horn blasted staccato warnings behind me. I raised my arm, hand waving, and gestured them past.

I whirled on the ball of my sneaker, flung out my arms and kept walking backward. “The road’s wide enough for us both.”

A monster of a truck rolled to a stop two car lengths away from me. The driver, a handsome fae with molten copper eyes and mahogany curls, grinned through the windshield before whipping his ride in a squealing circle of burnt rubber. He pulled the behemoth alongside my pathetic self and idled with his gas guzzler facing in the wrong direction. The window rolled down, and frigid air poured out of the cab smelling of bergamot and patchouli. The heady combination of scents made my already weak knees sag, and I stumbled back. The driver flung open his door and lunged in time to catch me before I fell.

Suspended in his arms, I traced the stern curve of his frown. “Nice save.”

“I do what I can.” Shaw drank in the sight of me like he was the thirsty one.

“I’m hot, tired and smelly,” I grumped. “I also have the world’s strongest craving for KFC.”

His laughter rocked me in his arms. “Mable told me you volunteered for the cockatrice case.”

“Volunteered is a strong word for what actually happened.” But as a rookie, pickings were slim.

Until I skimmed the file she put in my hand, I hadn’t known what a cockatrice was, let alone that fae bred them locally. According to the picture I was given, Farmer Brum’s prize bird looked like a cross between a Rhode Island Red rooster and the world’s smallest dragon. Basically a surly chicken with a scaly underbelly and a serpentine tail, sickle claws and, in rare cases, the ability to spit flames.

What the documents hadn’t mentioned was how ungodly ripe cockatrice smelled, but it made tracking the thing easy-peasy.

Shaw’s brow puckered as he scanned the road. “Where’s your car?”

“I left it out at the Brum farm.” The better to stalk my prey.

“Ah. That explains the sunburn.”

“I’ll buy some aloe after I cash in my bounty check.” I tapped him on the chin. “There’s a reward for Ringo’s safe return.”

“Brum wants his Starr breeder back that badly, huh?”

His sigh urged me to console him. “There was a joke in there somewhere, wasn’t there?”

“Ringo Starr, as in the drummer for The Beatles?” He shook his head. “How do you not know that?”

“Maybe because I’m eighteen—” I screwed my pointer finger into his chest, “—and not ancient like some people I know.” I stuck my tongue out at him, emphasizing my maturity level.

Faster than I could squeak out a protest, Shaw claimed my mouth with urgency that managed to melt the parts of me unaffected by the sun. When he broke the kiss, he was breathing harder than I was.

“Naughty incubus,” I murmured. “Now is not the time.”

The hungry glint in his eyes said he begged to differ.

“You’re right.” He straightened and set me back on my feet. “I brought reinforcements.”

“Oh?” I leaned to the right and peered past his shoulder. “Do tell.”

Shaw jogged back to his truck, lowered the tailgate and patted it once. Willing to be persuaded, I moseyed over while he climbed into the bed and hauled a cooler large enough to hold a dead body to the edge. The seal broke with a sigh I mirrored as I perched on the tailgate and let my legs swing.

“Catch.” He tossed me a bottle of water slick from the ice bath, and I held it against the stinging base of my neck while he rustled around. “I’ve got twenty-three more friends where he came from.”

“Kinky.” I twisted the lid and drank until I sucked air. “Toss me another.” He did, and I drained it too, but stopped at three before the cramps in my belly got serious. “What brings you out my way?”

The cooler protested when Shaw sat on its top and stretched out his long legs toward me.

“Can’t a guy be worried about his girlfriend and want to check up on her?”
Okay, I admit it. My heart fluttered. Having Shaw call me his girl made me giddy.

“Nice try,” I allowed, “but no. I can see the open case file on your dash from here.”

“Point to you.” He peeled the label from the bottle of water clenched in his fist. “What do you know about cockatrices?”

The use of a stalling tactic made me wonder if this wasn’t some kind of test.

He was my training officer after all.

Staring over my shoulder at him cramped my neck, so I turned to face him. “Enough not to look one in the eye.” Holding their stare would kill you. It was all very Medusa-like. I shifted one hip and pulled a shiny compact, the clamshell kind with double mirrors, out of my pocket. “I also brought this in case he tries to flog me.”

“Except that seeing its reflection would kill it,” Shaw interrupted me.

“Leave me to my fantasies.” I was ready to wring its stinky neck barehanded.

His toe nudged my thigh. “I’d like to hear more about these fantasies of yours.”

“Not these you wouldn’t.” I pinched his leg through his jeans. “They involve barbeque sauce.”

I was born and raised in Texas after all.

“Come on. The truth this time. What brings you out to this fine stretch of unnamed road?” The mile markers had run out about the same time as my enthusiasm for this case. “If you came to tell me chicken jokes, I’ve heard ’em all.” One guy at the office didn’t even bother with a punchline, he just started clucking.

“A favor.” Shaw rubbed his jaw. “Have you met Jim in accounting?”

“Once.” I spun my bottle’s cap on the bed liner. “I paid him a visit because my check was wrong.”

“His middle boy is missing.”

“Oh no.” I slapped a hand over the whirling cap to stop it. “How can I help?”

“Jim’s family lives in one of the new all-fae subdivisions near Monahans. I want you to ride out with me to talk to the family.” He braced his forearms on his thighs. “Missing persons cases are bad, Thierry. People get angry. They get loud. They get violent. And we’re the ones wearing the badges.” His long fingers threaded together. “This is a solid opportunity for you to get your feet wet handling this type of case. Say the word, and I’ll pen your ID number on the tab next to mine. Are you ready for this?”

The offer to assist him was huge, but I had gone big before, and it had almost killed me.

Still. There was the missing kid to think of, so I looked Shaw square in the eye. “Let’s do this.”