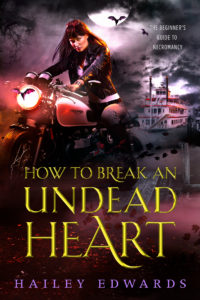 The Beginner’s Guide to Necromancy, Book 3

Grier finally has the one thing she’s always wanted: Boaz Pritchard. Too bad her dream boyfriend is keeping her up nights, just not in a sweaty or fun way. Boaz has dialed down the Southern charm and stopped returning her calls. His job forces him to keep secrets, but his radio silence is cranking up her suspicions. He’s a shameless flirt, but he’s her shameless flirt…right?

Soon an attack on Woolworth House leaves her with bigger problems than he loves me, he loves me not. Vampires are on the prowl, and they aren’t the only predators circling. A new threat has emerged, one with blood rights to Grier. With enemies closing in on all sides, she must choose her allies, and the decision could make or break her…and her heart.

Warning: This book contains a buttload of zombie parakeet poop. Like grab a poncho and thank me later. Watch out, y’all. It’s about to hit the fan. Hearts will break, and heads will literally roll.