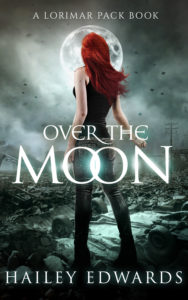 Dell has persuaded the Bloodless army to fight alongside her pack in Butler, but she still has to get there. Halfway home, the rift detonates, blasting out a magic surge that sweeps across the globe, frying electronics and spells alike. Leaving her with no way to get home except on her own two–or four–feet.

Dangerous times demand equally lethal alliances, and she has to make a risky deal if she wants to reach the front lines before it’s too late. The bargain grants an ancient fae power over her, a hold she vowed no man would ever have on her again, but freedom requires sacrifice.

As the threshold between Earth and Faerie erodes, humans and supernaturals alike are in danger of being erased as the fae seek to claim this world as their own. This is the moment when new legends arise and old gods fall, when fates unspool and futures unravel, when battles are won and lives are lost.

You can purchase your copy here.