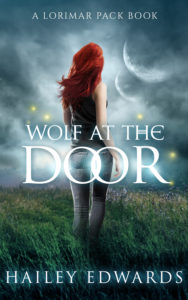 Prison is no one’s idea of a good time, and it’s even worse for Dell. Confinement has her inner wolf snarling as she paces their cell, and there’s no end in sight. Just as she reaches her breaking point, the pack liaison shows up with an offer she can’t refuse. Dell’s freedom in exchange for going to Faerie and recapturing the fae prince responsible for her current digs.

But this fool’s errand won’t be a solo mission. Isaac Cahill has lost Dell twice, and he’ll be damned if she slips through his fingers again. This time, he’s not letting her out of his sight. Even if it means earning more than a few love bites from his pissed off she-wolf.

What they discover on their perilous quest is that war is closer than anyone imagined. As trusted allies fall and dangerous new threats emerge, Dell discovers one defining truth. Isaac is hers, and she’ll fight to the death for him. And, at the rate this war is coming, she might not have long to wait.

You can purchase your copy here!