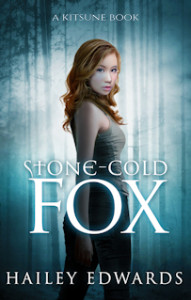 Mai’s plans for a weekend of cosplay fun and games at Fan Expo come to a screeching halt when a smokin’ hot fae with a vendetta against her father decides the best revenge is claiming her for his own.

Her father cost Ryuu everything: his home, his family…and his mate. Ryuu wants his pound of flesh, and he’s willing to take it out of Mai’s hide, bite by sensuous bite.

While she’s quick to bare her teeth and snap at Ryuu’s gentling hand, she sheathes her claws once he offers her secrets about her life and her father that rock the foundation of her world.

Caught between Ryuu’s tender persistence and her father’s iron will, Mai’s not sure who to trust, but before it’s all over this kitsune will show them both why she’s one stone-cold fox.