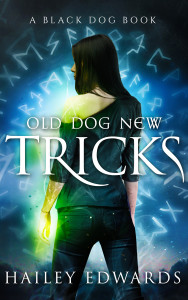 While Thierry is away, the Morrigan will play. Snatching the crown from her daughter-in-law’s head wasn’t the motherly thing to do, but Thierry doesn’t mind trading the throne in Faerie for the ratty couch in her Texas apartment. The old crow is welcome to it. But ruling one world is not enough. The Morrigan wants an all-access pass to the mortal realm too.

An attack on the marshal’s office leaves Thierry shaken…and Shaw missing. Now the fight brewing since Thierry took up the Black Dog’s mantle has landed on her doorstep, and the only way to save the man she loves is to defend the title she never wanted.